Hello everyone, spring has arrived and I’m back to tell you a bit about my touring experience around Europe, songwriting and a new competition I would like you all to be part of please 🙂

The last time I blogged I was just about to embark on my first ever European Tour as one of the support acts to Ed Sheeran. I was a little nervous about how I would feel about living on a tour bus for two weeks, but also very excited about the prospect of performing in lots of different countries and working beside two very experienced artists like Ed Sheeran (www.edsheeran.com/) and Passenger (www.passengermusic.com). After a couple of days of living on the tour bus I got into a routine with arriving at venues mid morning, get in to freshen up and then onto sound check to make sure all was set and ready for each show at night.

I also took time to meet with fans outside each venue and in Sweden I even performed a little daytime impromptu gig on the lakeside with a group of fans who had arrived early to the venue, which was a fantastic experience. I’ve always felt it important to communicate with the fans directly and cease each opportunity to do something fun and different with them, as without them I wouldn’t be having a music career in the first place so they mean a lot to me. In another city a few fans had brought along a sign which they held up in the audience when I was on stage, it said ‘Free Hugs’ so I thought why not and asked them up on stage for a hug! It was hilarious and made everyone smile and share hugs 🙂 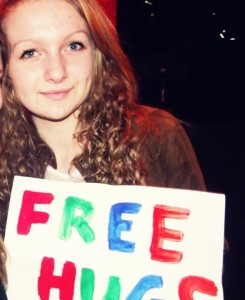 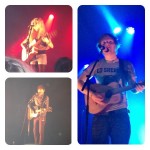 I also filmed little clips along this journey right from leaving my house, all around Europe until I came back home again and as I planned on my return I edited all these clips into a video. I have used the montage video of all the European Tour clips with various cities, venues and lots of fans in it as the video for my lead track ‘The Apple Tree’ from my brand-new EP which is out on iTunes on 23rd April.

I will be off on my own UK & Ireland Headline Tour after my EP release in April as well as supporting Example on his UK Arena Tour. My new Martin guitar will be coming with me on this tour but the poor guitar does not have a name as yet and I like my guitars to have personal names 🙂 I was thinking you could maybe all help me decide what to call my guitar.  Send in your entries to Most Entertaining – which is where I first went to play guitar and sing in a group with others.  The prize for the most original name for my new guitar will win a 6 week guitar workshop course in Edinburgh.  Email entries by Saturday 28th April with the subject ‘Name Nessie’s guitar’ to [email protected]mostentertaining.com.  I will announce the winner at Most Entertaining’s student gig on 29th April, Edinburgh. See their facebook page for details.  http://www.facebook.com/events/160538887400508/

In the meantime, go check out my EP video : )

If you’re an aspiring musician and would like to learn the guitar, please get in touch with Most Entertaining about guitar lessons and the options available. 0131 477 7821.